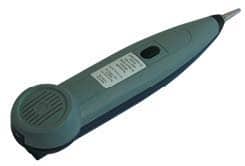 Timeout
To conserve the battery AMP109J will switch off after five minutes.

At the end of the timeout period the AMP109J will shutdown after producing a sign off tone consisting of three beeps followed by a higher pitched beep.

Battery low
If the battery voltage drops during operation, an audible indication is given. This indication will also be given each time the unit is switched on if the battery is low.

There will be about two hours continuous operation from the time the battery low warning is first sounded.

Headset operation
Plug in a suitable headset. Headset No. 7 or 8, or Receiver Headgear 17 or 18. SAFETY: Use of other headphones may result in the user’s audio exposure exceeding safe limits. Operation is identical to using the probe on its own. The loudspeaker will be switched off to prevent disturbing others. If the socket gets dirty, just clean it with a brush.